Departing from knitting for a moment to bring you my hubby’s latest news.  Henry had two pieces in the grad sculpture show at the University.  The name of the show “Dis-armature” was a play on the name of their normal gallery.  The usually show in this little hovel…no kidding, it is PART of a single wide trailer.  The space is terrible, lighting poor and no one wants to go over there.  That gallery has been dubbed “Armature.”   The new art building on the other hand, is spectacular.  It is a few years old, very modern, has a gallery space that is meant to showcase art, good lightning, high ceilings, clean walls….everything one would expect in a gallery space.  So, this was the first show sculpture got to have there…thus “Dis-armature.” 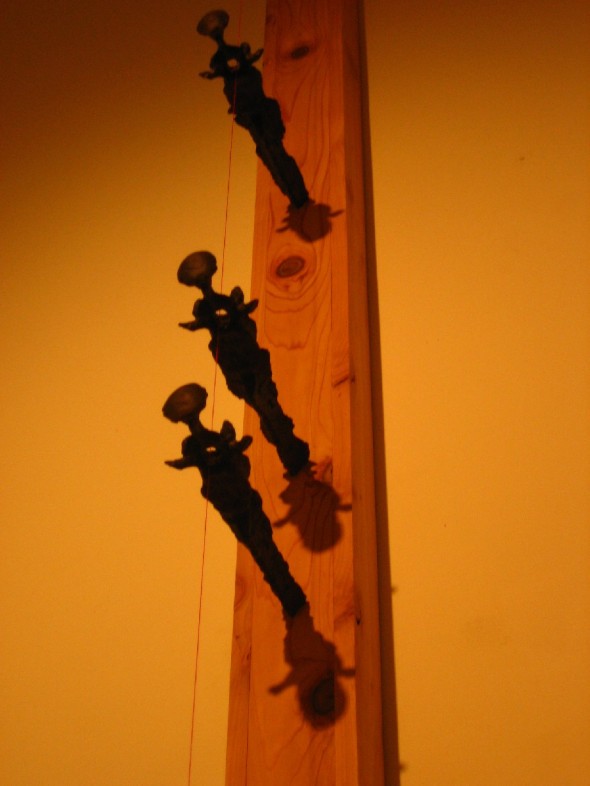 I have set up a seperate Flickr group for this.  Here’s the link.  http://www.flickr.com/photos/slippingthroughmyfingers/sets/72157602149053585/     I’ve included one photo here just becasue I had to!  I’m very happy with both the show adn Henry’s work.  It really seemed to come together.  he piece entitled “Interruption” is concerned with the sundry things that interrupt our lives and with signals being interrupted in the body.  Henry’s been dealing with issues that have intervened…interrupted…disrupted our lives in his work.  He has not shown any of it until this show.  He was a little concerned about revealing so much…but I totally support it.  People bring thier own thoughts and baggage when they view art.  He doesn’t have to SAY everything.  It’s there to be taken on its own.

I took the girls to the openeing.  They were great.  Here’s a picture of Mycah eating noodles….we call them Noonies.

A Call to Action Join the Movement