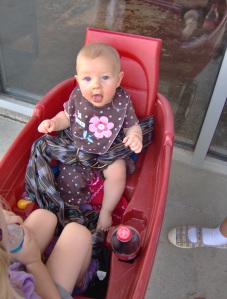 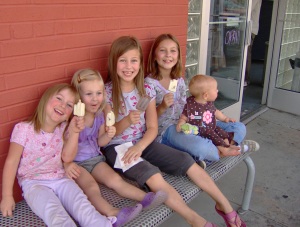 I kept Allison’s three girls today along with my two.  We decided to walk to the popsicle place on Kirkwood.  It’s called Las Paletas.  They ahve the most awesome popsicles.  Bobby Flay challenged them to a throwdown and he lost!  Anyaway, the girls are crazy about the popsicles, so we walked.  It is about a mile…one way.  I had to take the wagon for Elliot (9 months) and Evans (3.5 years).  Mycah (4 and some change) decided she needed to ride as well.  So, I wound up pulling them in the wagon most of the way there and back.  I am exhausted.  But, it was worth it.  Don’t they look like sisters!  They are so similar that they look more like sisters than cousins.  Of course, they also all look like Allison…even my girls! 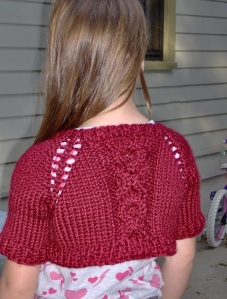 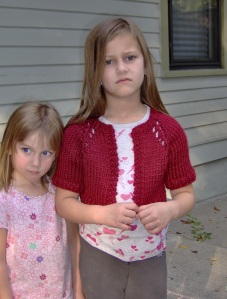 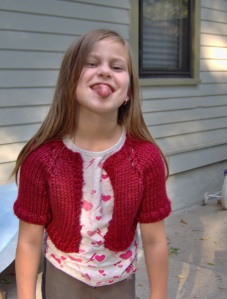 Here’s a few pictures of the shrug I made Grey.  She needed a little something for school.  It had to conform with the color regulations for her school.  She would have rather had something pink, I’m sure.  Anyway.  She is very pleased, even though it’s hard to tell in the picture.  She was tired from walking so far and was not digging the modeling shots!  I made up this pattern myself.  It is top down and seamless.  I used Caron Simply Soft Chunky.  I used about 2.2 skeins, so this would be about 110 yards.  The best part is that it took me about 1.5 days to knit!!!!!! Talk about some instant gratification.   The back has an OXOX cables so that she has hugs and kisses from momma all day!  I know I can be a cheeseball sometimes.  Anyway, I am going to give the pattern to Wendy to try out and if it works for her, I will put it on my blog.  It is my first design!!!! 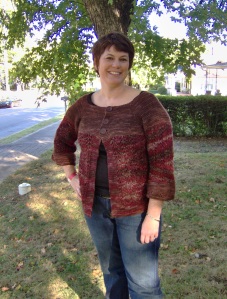 Here is a picture of me in the February Lady Sweater.  I have gotten to the point that I hate to be photographed.  But…I do love my sweater.  This picture was taken by Henry right before we left for the Fall Carnival for Grey’s school.  Henry and I helped set up and take down a booth and we both worked a couple of shifts in it.  I also baked a pound cake and 4 dozen chocolate steel cut oat cookies for the bake sale that went on during the carnival.  This past week has been quite busy and I am exhausted.  It was all worth it though.  I think our family made some great memories his weekend.

I finished my February Lady Sweater about a week to a week and a half ago.  Then I threw it in my trunk to show the girls at Haus of Yarn in Nashville. I purchased the yarn there and was very proud…so proud that I made the poor girls look at it!  Anyway, the actual knitting of it took about two months from cast on.  During that time, I knit the yoke once, ripped it out and reknit it because it was too small; tried three different cuffs on one sleeve;ran out of yarn;  finished both sleeves only to find they did not match; and then finally reknit them.  It took two stores, four different sets of buttons and the opinions of all near and dear to me…well some strangers too.  Now I have soaked it in wool wash and blocked it.

This is the very first thing that I have knit for myself AND actually kept.  I have knit several items with the idea of keeping them only to find someone I love that I feel cannot go without said item.  I knit for people I love, babies and charity.  Mostly, I knit for those I love because it seems like a tangible expression of my love.

Ok, I’m rambling.   The sweater was a joy to knit.  I used three skeins and a tiny bit more of Malabrigo in the Stonechat colorway and 1.5 of the brown (I don’t remember the name).  The buttons are a shell material and the color matches the brown of the yoke so they disappear.  I do plan on taking a modeled shot once the thing dries.  I’m posting a couple of photos just to show what it looks like so far because I am so excited.  I am also posting a picture of the bath tub after I soaked the sweater.  All I have to say is ….gross.  This sweater took many rips to the playground and to the backyard.  I also found both cats sleeping on it at different times……so it was DIRTY.  I expected a little dirt, but that is just yuck. 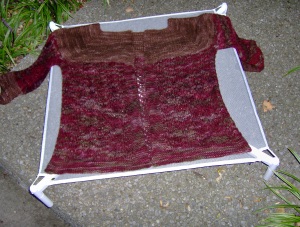 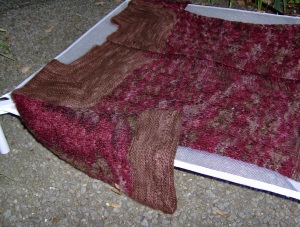 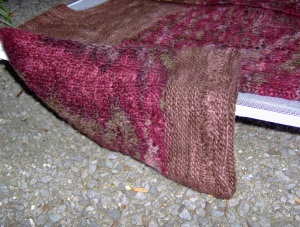 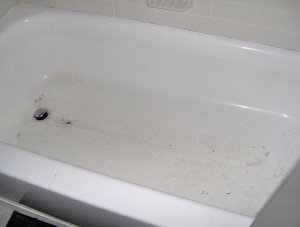 A Call to Action Join the Movement